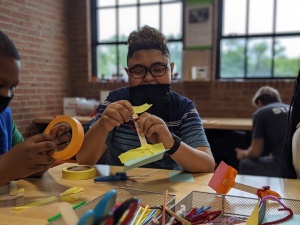 Summer Camp was so much fun at our Boys & Girls Clubs of St. Louis locations! At the beginning of camp, students took a field trip to The Magic House at MADE STL. They had a great time playing, exploring, creating, and collaborating. Students also learned the fundamentals of coding and mechanics at camp. As their projects evolved they worked on building motors and building their cardboard structures. Once these self-guided projects were completed, we held an awards ceremony and carnival. Students were able to see each other’s carnival games in action, and we announced the winners of the competition.